Resection of nose skin tumors with reconstruction in Iran

Nose skin bumps and red lesions may not always be superficial skin problem, as it could be an indicator of skin cancer and needs to be checked at early stages. Luckily, Iran offers you the best medical options for the resection of nose skin tumors with reconstruction to ensure you get the best results medically and obtain the most aesthetically- pleasing appearance afterwards. This surgery is performed by widely experienced ENT surgeons like Dr. Saeedi in Tehran.

Nose reconstruction is a surgery done to the nose to change its shape or improve its function. Apart from cosmetic reasons, it can be done for medical reasons such as correcting defects after the removal of a skin tumor on nose. Please continue reading to have a better understanding about the resection of nose skin tumors with reconstruction in Iran with Dr. Saeedi.

What is nose skin cancer?

Basal cell carcinoma (BCC) is the most frequently occurring form of all cancers and it is known as the most common form of skin cancer. Statistically speaking, more than 4 million cases are diagnosed every year in the United States only.

This type of cancer arise from abnormal, uncontrolled growth of basal cells, and grows slowly, which makes most cases curable and cause minimal damage when caught and treated early. BCCs can occur anywhere on the skin, but the most common areas are the ones that are exposed to the sun, such as the face, head, neck, ears, and nose.

Nose skin cancer can look like shiny bumps, red spots, open sores, scars or growths with slightly elevated, pink growths, or rolled edges. At times, nose skin tumors may ooze, crust, itch or bleed. However, this condition can look quite different from one person to another. 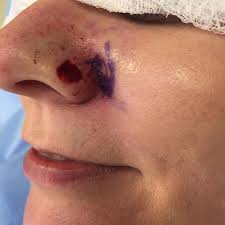 Despite the fact that nose skin tumors rarely spread beyond the original tumor site, if allowed to grow, these lesions can be disfiguring and dangerous. Untreated tumors can become locally invasive, grow wide and deep into the skin and destroy skin, tissue and bone. In rare cases, skin cancer spreads to other parts of the body, and may become life-threatening.

Can nose skin cancer be treated?

There are many effective options for early and advanced conditions of nose skin cancer. In general cases, when detected early, most basal cell carcinomas (BCCs) can be treated and cured. Prompt treatment is vital, because as the tumor grows, it becomes more dangerous and potentially disfiguring, requiring more extensive treatment.

In most cases, a number of effective treatments can usually be performed on an outpatient basis, using a local anesthetic with minimal pain. Afterwards, most wounds can heal naturally, leaving minimal scarring.

How can nose skin cancer be treated?

There are many surgical and non-surgical options, including:

This procedure is most effective when the treated nose skin lesions are small, and it has a success rate of 95%.

In this procedure, the surgeon shaves off or scrapes the BCC using a curette (a sharp instrument with a ring-shaped tip), before using heat or a chemical agent to destroy the remaining cancer cells, stop the bleeding and seal off the wound.

The physician may repeat the procedure a few times during the same session until no cancer cells remain. Typically, the procedure leaves a round, whitish scar resembling a cigarette burn at the surgery site.

Mohs surgery is the most effective technique for removing BCC, as it has a success rate of 99% while it harms almost none of the healthy tissues.

This procedure is performed during a single visit, in stages. First, the surgeon starts by removing the visible tumor and a very small margin of tissue around and beneath the tumor site. Afterwards, the surgeon color-codes the tissue and draws a map correlated to the patient’s surgical site.

In an on-site lab, the surgeon makes sure that no cancer cells remained by examining the tissue under a microscope. If so, the surgeon returns to the patient and removes more tissue exactly where the cancer cells are.

Finally, the doctor repeats this process until there is no evidence of cancer before closing the wound and allowing it to heal on its own.

This procedure is mostly done for small and early cases of skin cancer that have not spread yet with a success rate of 95%.

During this procedure, the surgeon uses a scalpel to remove the entire tumor along with a “safety margin” of surrounding tissue and sends it to an off-site lab for analysis. The margin of skin removed depends on the thickness and location of the tumor. If the lab finds cancer cells beyond the margins, more surgery may be performed at a later date until margins are cancer-free.

This procedure is less precise than the aforementioned procedures and has a success rate of 90% only, as there is no way of knowing that the entire tumor was destroyed. This procedure is primarily used for skin tumors that are hard to treat with surgery and in elderly patients or people in poor health for whom surgery is not advised.

The physician uses low-energy X-ray beams to destroy the tumor, with no need for cutting or anesthesia. Destruction of the tumor may require several radiotherapy sessions over a few weeks or daily sessions for a specified time.

Cryosurgery is considered an effective method for smaller, superficial nose skin tumors, as it is a less-invasive procedure. It is especially useful for patients with bleeding disorders or problems tolerating anesthesia with a success rate between 85% and 90%.

The surgeon uses a cotton-tipped applicator or spray device to apply liquid nitrogen to freeze and destroy the tumor. Later, the lesion and surrounding skin may blister or become crusted and fall off, allowing healthy skin to emerge.

Despite the fact that laser surgery is not yet FDA-approved, this procedure is still used for superficial skin tumors but as a secondary therapy, especially when other techniques have been unsuccessful.

During this procedure, the surgeon directs a beam of intense light at the tumor to target superficial BCCs. Some lasers vaporize (ablate) the skin cancer while others (nonablative lasers) convert the beam of light to heat that destroys the tumor without injuring the surface of the skin.

This procedure is mainly used for superficial skin tumors on the face and scalp, but it is not recommended for invasive BCC.

The surgeon starts this procedure by applying a topical agent to make the lesion sensitive to light or by injecting the agent into the tumor. Afterwards, the surgeon gives the skin enough time for absorption before using a blue light or pulsed-dye laser, which causes a reaction that destroys the BCC.

There are creams or gels applied directly to affected areas of the skin to treat superficial skin cancer with minimal risk of scarring. For example, Imiquimod activates the immune system to attack cancerous cells, while 5-FU is a topical chemotherapy that kills cancerous cells. These creams include, but not limited to: 5-fluorouracil (5-FU) (Efudex®, Carac®, Fluoroplex®, Tolak®) and Imiquimod (Aldara®, Zyclara®).

How can I take care of the treated area after the resection of nose skin tumors?

You have to follow these recommendations to allow the treated area to heal properly:

What is nose reconstruction after nose skin cancer removal?

Reconstructing cancer defects on the nose has many challenges, since the nose is different from any other part of the face as it occupies the very center of the face and holds significant aesthetic importance along with crucial functional importance with breathing.

In most cases, cancer affects one or all three of the nose layers, consisting of overlying skin of varying thicknesses, a supporting framework of cartilage and bone, and an inner lining of specialized skin. Each of these layers needs to be reconstructed thoughtfully to achieve an excellent functional and aesthetic result.

Is it necessary to reconstruct the nose after removing the skin cancer?

Skin grafting strands for removing skin from one portion of the body and using it to repair a defect at another location. In this procedure, the surgeon may relocate skin from elsewhere on the body to be used if the area of missing tissue is too large to be covered with a local flap. As with a local flap, reconstructive surgery takes place a few days after the initial removal.

A staged procedure such as a forehead flap is a multi-stage process that can begin the day of the Mohs procedure. The surgeon places an expander under the forehead to stretch the skin and create more healthy skin to be used for the nose. When enough new skin has grown, the surgeon will use it to cover the nose and create a result that is as natural as possible.

What are the benefits of having the resection of nose skin tumors with reconstruction in Iran?

Why should I have the resection of nose skin tumors with reconstruction in Iran with Dr. Saeedi?

Dr. Masoumeh Saeedi is one of the distinguished board-certified ENT surgeons in Iran with a fellowship in head & neck surgery. She is also an associate professor in otolaryngology in Baqiatallah University of Medical Sciences in Tehran since she was only 33-years old.

To remain up to date with all novel and advanced techniques in her specialty, Dr. Saeedi has followed many specialized courses in countries like Malaysia, Germany, Portugal, France, South Korea to name a few.

During her long career, Dr. Saeedi has performed more than 7,000 successful surgeries, including the resection of nose skin tumors with construction in Iran for both Iranian and international patients. You can also have your surgery done in Iran by Dr. Saeedi. All you need to do is to contact us now to have a free online consultation about the resection of nose skin tumors with reconstruction in Iran with Dr. Saeedi.

The cost of the resection of nose skin tumors with reconstruction in Iran with Dr. Saeedi

The cost of the resection of nose skin cancer varies according to the procedure used. For instance, Mohs surgery, which is the most effective treatment method, costs between $1,000 and $2,000 worldwide. However, the post-removal procedure, i.e. nose reconstruction, costs between $2,500 and $12,000 worldwide. The good news is that both surgeries are performed in Iran by Dr. Saeedi, the renowned ENT surgeon, at a very affordable cost.

The surgery itself does not involve pain, as the patient will be under anesthesia during the procedure. However, after the procedure you may experience some discomfort and moderate pain in the initial stages of healing.

How long does it take to heal after having nose reconstruction?

In most patients, it takes roughly 6 weeks for the bones and tissues in your nose to heal following surgery.

Can the surgical removal of the tumor cause infection?

In rare cases, signs of skin infection may appear several days after surgery. These signs include increasing redness, swelling, and pain around the wound with a possibility of pus or discharge from the wound.