The stapes is one of three bones called the ossicles or the auditory ossicles. It is considered the smallest bone in the human body, but it plays an important role in the hearing process. Some patients might have a condition that affects the stapes thus preventing them from functioning properly. Such conditions like otosclerosis may lead to hearing loss and require a surgical procedure called stapedectomy to treat. However, a lot of patients cannot afford to have the surgery in their own countries. So, many of them choose to travel abroad to have the surgery. If you are one of them, you can consider to have stapedectomy Iran due to the reasons that will be presented in this article. Please continue reading to know more about this surgery and that advantages of having stapedectomy in Iran with Dr. Saeedi the renown ENT surgeon in Tehran.

Stapedectomy is an ear surgery that is performed to treat hearing loss that is caused by the decreased movement of the stapes. It involves the removal of the stapes and replacing it with an implant. 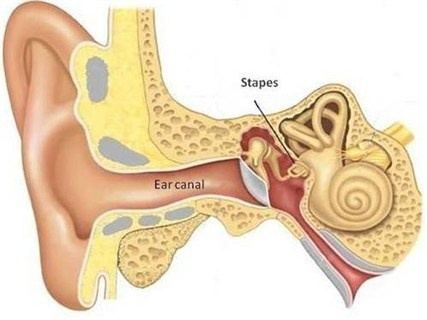 How is stapedectomy performed?

During stapedectomy, the patient will be under general or local anesthesia. The surgeon will make an incision in the ear canal, then he/she will lift the eardrum to make the ossicles visible. The surgeon then uses a microscope to confirm otosclerosis.

After confirming that the hearing loss is caused by the staples, the surgeon will detach the stapes from the ossicles. The removal will be either done by directing a laser beam or by a drill.

If the surgeon is performing the procedure using laser, he/she will be able to remove the diseased part of the bone. But when using the surgical instruments, the surgeon will remove the whole bone.

After the removal, the surgeon will put a prosthesis in the staples’ place and connect it to the other two bones. Afterward, he/she will test that the auditory ossicles and the prosthesis are functioning properly. Then, the surgeon will put the eardrum back to its correct position, seal the area using a graft and put ear packing in the ear canal. Some surgeons take the graft from a vein from the patient’s arm for the closure of the opening created due to the removal of the stapes. The whole procedure takes about one hour.

What are the materials used in stapedectomy?

Who is a good candidate for stapedectomy?

To avoid having postoperative complications and reduce the risks of stapedectomy, the surgeon will check the patient to make sure he/she is a good candidate instead of performing the procedure for any patient with otosclerosis. So to consider a patient as a good candidate for stapedectomy:

Why having stapedectomy in Iran with Dr. Saeedi?

So let us answer the questions and tell you why you should undergo stapedectomy in Iran:

The low cost of stapedectomy in Iran

Stapedectomy surgery costs around $8,000 in the United States of America and $4,000 in the United Kingdom. In Iran, it is much cheaper to have otosclerosis treatments and you can have stapedectomy for about a quarter of the cost in the US while having as good quality and healthcare services as you might have in the developed countries.

In other words, you can have an excellent otosclerosis medical treatment, enjoy traveling and save money at the same time when you choose to have stapedectomy in Iran.

Iran has some of the best ENT surgeons in the world. Iranian surgeons are quite experienced and well trained. Also, the Iranian hospitals and medical centers are equipped with the most advanced medical technology.

Among the best ENT surgeons in Iran, Dr. Masoomeh Saeedi is well renown. She has a fellowship in neuro-otology since more than 12 years ago. During this long years of expertise, she has performed more than 5,000 complicated surgeries, including stapedectomy, for national and international patients. She also passed many specialized international courses in countries like Germany, France, Portugal, South Korea, Malaysia and other countries.

In addition to practicing medicine and performing surgeries, Dr. Saeedi is also an associate ENT professor in Baqiatallah University of medicine in Tehran.

In summary, by undergoing stapedectomy in Iran with Dr. Saeedi you will have an affordable high-quality surgery with a cost of no more than one quarter of what you would pay in the western countries.

Before stapedectomy surgery, you need to tell your doctor if you are taking any medicines. Your doctor will tell you if you need to stop taking any of your medications. It is better to take a shower before the surgery (because you will not be allowed to shower for at least two days after the surgery) but you should not apply perfumes or nail polish on the day of the surgery.

After the surgery, the surgeon will put a cotton ball inside the ear canal. That cotton ball should be changed when needed. The patient should stay on bed rest after the surgery for 4 hours. Afterward, he/she will be asked to stand up to check if there is vertigo, nausea or dizziness. The condition of the patient will determine whether he/she is going home on the same day or not.

The recovery process from stapedectomy might take from four to six weeks. During the recovery time, you need to rest and have enough sleep. You should try to sleep on your back and lift your head a bit using billows.

You should avoid any exhausting activity and avoid lifting heavy objects for about a month. But it is okay to do some activities like walking. It is also very important to avoid any sudden movements of the head. Blowing the nose must be avoided after stapedectomy because it increases the ear pressure and that can move the new bone from its place and lead to the failure of the surgery.

During the recovery after stapedectomy, you should avoid swimming, diving and flying in a plane. When you need to take a shower, you should use a silicone earplug along with cotton coated with vaseline.

IF you are wondering about how long does it take to heal after stapedectomy and when you can go back to work, you should know that going back to your job depends on the nature of your job. If your job requires lifting heavy objects, you will need to wait till you heal completely and that usually takes a month. Otherwise, you can return to work after a week.

If your job involves being exposed to loud noises, it is important to wear protection. Exposure to loud noises without protection after stapedectomy surgery might damage your ear.

Your doctor will prescribe you some medications to deal with the pain and might also prescribe some ear drops if needed.

What to expect after stapedectomy surgery?

The benefits of stapedectomy surgery

Most of the patients with otosclerosis tinnitus say that this tinnitus disappears after stapedectomy.

The risks and complications of stapedectomy surgery

treatment for otosclerosis surgically and performing stapedectomy may lead to some complications. These complications might include:

Titanium, gold and teflon/platinum prosthesis are not affected by the magnetic field of the MRI, so it is safe to have an MRI scan when you have a prosthesis made from the mentioned-above material.

Having stapedectomy on both ears

Some surgeons prefer stapedotomy because it is simpler and safer than stapedectomy. However, it has been proved that both procedures are safe and have high success rates. The success rate of either of them depends on the skills of the surgeon.

While some people prefer to perform stapedectomy after pregnancy, it should be the other way around. Pregnancy makes the hearing loss worse because it accelerates the growth of the bones. This acceleration will make the stapes fix in its place faster.

Can stapedectomy be repeated?

If the surgery fails, it is possible to have stapedectomy revision in the same ear.

Yes, many patients reported that tinnitus disappeared or decreased after stapedectomy surgery.

Can stapedectomy cause hearing loss?

This is rather rare. About 2% of the patients might suffer from hearing loss after stapedectomy surgery due to some complications.

Can a stapedectomy cause tinnitus?

Usually, stapedectomy is not painful and does not hurt a lot. But you might need some pain killer for a couple of days after the surgery.

Yes, the surgery is permanent, but sometimes it can fail after a few months which requires stapedectomy revision.

Yes, stapedectomy is a very safe procedure. It has a high success rate and a low rate of complications. This makes it one of the best medical treatments of otosclerosis.

Is stapedectomy worth it?

Yes, considering the high success rate and low rate of complications, it is very likely that it will help to improve your hearing.

How long after a stapedectomy can you fly?

Usually, you will be able to fly after four to six weeks following the surgery.