Eardrum or tympanic membrane is a very thin membrane that is shaped like a cone. It separates the external acoustic meatus from the auditory ossicles. Eardrum transmits the sound waves from the external ear to the ossicles in the middle ear.

Sometimes eardrums can be perforated for a lot of reasons like loud sounds, some infections and due to the insertion of foreign objects in the ear. This rapture can lead to hearing loss and that is why the reparation of the perforated eardrum is important.

Since tympanoplasty operation is very delicate and needs high expertise, it can be very expensive in many countries. That is why many patients travel abroad to undergo the operation in another country either for having it done by a more experienced surgeon or to pay a less amount for it. If you are one of those people seeking tympanoplasty abroad, we advise you to consider having tympanoplasty in Iran to achieve the two aforementioned goals at the same time. 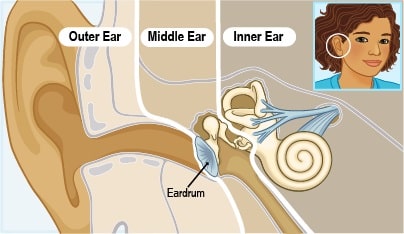 Tympanoplasty, or eardrum repair surgery, is a surgery used to repair or reconstruct eardrum rupture when the hole in the eardrum is massive and affect hearing.

What are tympanoplasty types and how are they performed?

There are four types of Tympanoplasty, each of which has a different characteristic. The doctor chooses the right one based on the patient’s age and the cause and the size of the hole, and the way tympanoplasty is done differs depending on the type of surgery:

Patch tympanoplasty is the simplest type of eardrum repair surgery and can be done when the holes in the eardrum are relatively small. It can be done in the office for adults but it requires general anesthesia for children.

During the surgery, the surgeon will irritate eardrum edges using a special instrument and place a paper patch over the hole. The blood from the irritation will hold on the patch.

This surgery is performed in a few minutes, but the patient must come back after six weeks to see if the hole is healed.

This procedure too is considered a minor procedure. It is possible to perform fat tympanoplasty in the office and it only takes 15 minutes to be performed.

In fat eardrum repair surgery, the surgeon freezes the ear lobe and removes a little bit of fat. After irritating the eardrum, the surgeon places the fat throughout the hole.

This surgery is done only under general anesthesia. Lateral tympanoplasty is resorted when there are large holes in the eardrum or when the treatment with other surgeries failed. It takes from two to two and a half hours.

In lateral tympanoplasty, the surgeon makes the incisions behind the ear and widens the ear canal. He/she will remove most of the original eardrum and uses a fascia graft that he/she had harvested earlier to make the new eardrum.

Who is a good candidate for eardrum repair surgery?

Although most of the perforations heal on their own, perforations that persist after taking dry ear precautions, using ear drops or performing myringoplasty should be considered for repairing the eardrum surgically..

Why to consider undergoing tympanoplasty in Iran?

Iran can be considered one of the best countries to have surgery for many reasons. In Iran, you can have the best medical care and health service and perform the surgery at a low cost. On top of that, Iran has some of the best doctors and surgeons in the world, and this turned it into a famous destination for medical tourism.

In the field of ENT, Iran is proud to be the home of many experienced surgeons who perform surgeries, including eardrum reconstruction and reparation, in high quality at affordable prices.

Why to undergo tympanoplasty in Iran with Dr. Saeedi?

Dr. Masoomeh Saeedi has a fellowship in ENT and neck & head surgery with a subspeciality in otolaryngology. After having her fellowship, she also practiced in international courses in Germany, France, Poland, Portugal, South Korea, Malaysia and other countries.

During her 12 years of experience as a specialized ENT surgeon, Dr. Saeedi has performed more than 5000 complex surgeries, including many tympanoplasty surgeries, for national and international patients.

In addition to practicing medicine and surgery, Dr. Saeedi is also an associate professor in ENT in Baqiyatallah University in Tehran.

Cost of tympanoplasty in Iran with Dr. Saeedi

While tympanoplasty cost ranges from $3,700 to $5,500 in the United States of America and around $3,600 in the United Kingdom, you can have the same surgery for much less in Iran while benefiting from the expertise of Dr. Saeedi. Tympanoplasty surgery cost in Iran with Dr. Saeedi is only a small fraction of what you would pay in other countries. Please contact Dr. Saeedi now to have a free specialized online consultation and a quote for your typanoplasty in Iran.

Tympanoplasty post-op: What to expect?

The patient usually is able to go home after a few hours of the surgery. It is normal to feel a little bit of pain, and the doctor might prescribe some painkillers to deal with it. Patients usually are able to return to work after one week or after two weeks if their jobs require heavy physical labor.

Bloody discharge from the ears after the tympanoplasty is common and can last for a week or two after the surgery. Some patients might hear some popping noises after the procedure which is very normal.

What you should do after eardrum repair surgery?

After the surgery, your ear will be filled with cotton packing, and your doctor might put a bandage on your ear. The cotton packing should stay there for the next week.

During tympanoplasty recovery, it is important to keep water away from your ear. This means you should not go swimming and you should wear a cap.

You should avoid crowded places to reduce the chances of getting sick. You should not blow your nose and if you had to sneeze, do it with your mouth open to reduce the pressure in your ear.

Having tympanoplasty and closing the hole in your eardrum prevents water from entering the middle ear. It should also decrease the frequent ear infections and it might improve your hearing.

Patients rarely have long term side effects. However, some over-fifty-year-old patients reported a permanent change in taste. And some of them had some problems with balance.

Some patients said that they had hearing change (improved for some and got worse for others), while others reported that their hearing stayed the same.

Like any other surgery, tympanoplasty has some risks and complications such as:

What is the difference between tympanoplasty and myringoplasty?

Can tympanoplasty cause tinnitus?

Yes, tympanoplasty might cause tinnitus but it usually goes away after a few weeks of the surgery.

Tympanoplasty is usually used to regain normal hearing but it might not help to restore hearing in some cases. You should consult with your doctor before having the surgery.

Recent studies have shown that tympanoplasty can eliminate tinnitus for some patients and improve tinnitus intensity for others.

Can tympanoplasty cause hearing loss?

Tympanoplasty can cause a total hearing loss in some rare cases. Some patients might suffer from further hearing loss after the surgery but this is also rare.

How long does tympanoplasty take to heal?

Tympanoplasty recovery time is usually between 2 to 3 months.

Yes, tympanoplasty is very safe with a high success rate.

Is tympanoplasty worth it?

After tympanoplasty, you will be able to shower and swim without using any earplugs. You will have fewer infections in the middle ear so I think we can say it is worth it.

What happens if tympanoplasty fails?

If tympanoplasty fails, you can have the surgery again.