Tinnitus is a general term used to describe a type of hearing disorder in which a person senses sounds that have no external source, meaning that no sound has actually entered the ear from outside. Although the name of this disorder in English tinnitus, which comes from the Latin word tinnire meaning “ringing”, but the sounds that a person with this problem may hear are not just the sound of ringing. Different people may hear a wide range of annoying sounds such as ringing, hissing, whistling, roaring, popping, squeaking, and so on.

Tinnitus is different from auditory hallucinations, which are a mental disorder. Tinnitus may be continuous or intermittent (i.e. tinnitus comes and goes). Tinnitus can be bilateral in both ears or it can be felt in one ear and from inside the head or from a distance. Tinnitus is most noticeable when the background sounds are low, which is why people usually become aware of tinnitus at night and when they try to sleep in a quiet environment. In rare cases, the rhythm of tinnitus coincides with the rhythm of the heartbeat, which is called pulsatile tinnitus.

Who feels tinnitus of the ear?

Tinnitus is a very common phenomenon. It is estimated that 50 million adults in the United States of America suffer from this problem. Almost everyone has experienced tinnitus at least once in their life. For example, those who go to a loud music concert may have a temporary tinnitus. Furthermore, high doses of some medications, especially aspirin and other non-steroidal anti-inflammatory drugs, can cause tinnitus.

In most cases, tinnitus is mild and as a simple annoyance, but severe tinnitus can cause problems such as lack of concentration, sleep problems, and disruption of work and social relationships.

What are tinnitus causes?

Tinnitus itself is not a disease but a sign or a symptom of a disorder or disease. Therefore, the cause of tinnitus is actually a problem whose symptom is tinnitus. The most common cause of tinnitus is prolonged exposure to loud noises. These sounds damage the cochlear auditory cells in the inner ear. People who are constantly exposed to loud noises due to their jobs and professions, such as carpenters, captains, rock musicians, repairmen, people who work with loud instruments and weapons, or those who frequently listen to loud music, are more likely to be at risk of this disorder. 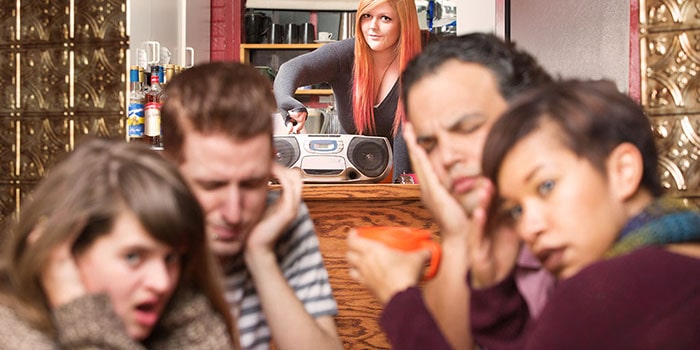 Other diseases and disorders that can lead to tinnitus include:

Furthermore, some habits such as smoking, consuming alcohol and caffeinated beverages and eating certain foods can make tinnitus worse. Stress and fatigue also appear to exacerbate tinnitus, but the reason for this is not yet clear to researchers.

To diagnose tinnitus, your ear, nose and throat specialist will examine your ear and perform an audiometric test. In this test, which is performed with the help of an audiologist, you hear sounds through headphones in an acoustic room and respond to them according to instructions. The results of this test can help your doctor diagnose the cause of tinnitus.

Your doctor may also ask you to have a CT-Scan or an MRI scan of your head and neck. These images are used to diagnose possible damage to the internal structures of the ear.

Because the type of the tinnitus sound you hear can help determine the cause, it is important that you describe the sound well to your doctor.

If tinnitus persists after treatment or if the tinnitus is caused by noise pollution, experts suggest a variety of non-therapeutic options to reduce or mask the annoying tinnitus. For example, there are devices that produce cheerful sounds, which are called white noise, to eliminate tinnitus. These electronic hearing aids, called tinnitus maskers, help the person cope better with tinnitus by producing sounds such as nature sounds (water, birds, etc.) that replace the annoying sounds.

If tinnitus and hearing loss are accompanied, special hearing aids can be used such that they can also eliminate tinnitus.

If the cause of tinnitus is excessive accumulation of earwax, a suction or ear wash may be helpful. If an ear infection has caused tinnitus, your doctor may prescribe antibiotics and eardrops containing hydrocortisone for itchy ears.

One of the newest methods to relief or treat tinnitus is laser therapy. In this method, the doctor uses a low-power laser to increase the cochlear metabolism so that the blood supply to the hair cells and cochlea can be performed better.

Sometimes, tinnitus goes away on its own and there is no need to intervene. However, it must be admitted that there are cases in which tinnitus that cannot be eliminated or reduced. These people need to be educated on how to cope with their problem. You can consult your doctor for this.

One of the non-therapeutic techniques for controlling tinnitus is sound therapy. In this way, certain sounds are played during a certain period of time to make it easier for the person to get used to the problem.

Finally, if the tinnitus is so annoying that it disrupts a person’s life and no other treatment works, the auditory nerve can be destroyed. In fact, in this method, the person decides to sacrifice the hearing to get rid of this annoying sound.

What medications are prescribed for tinnitus?

Various medicines have been tested for tinnitus. In some patients, taking low-dose anti-anxiety drugs (such as Valium (diazepam), or antidepressants such as Elavil) can help reduce the severity of the problem. Research has shown that injecting a type of steroid into the middle ear, along with taking an anti-anxiety drug called Alprazolam, is effective in some people with tinnitus. The results of some small studies have also shown that a hormone called misoprostol may be helpful in some cases.

How much does tinnitus cost?

There are various treatments for tinnitus, and as a result, the cost of treating tinnitus varies depending on the type of treatment. If you do not have a specific treatment in mind, you should first consult an ear specialist to find out the right treatment for you and then talk to your doctor about the cost of treatment. You can also ask Dr. Saeedi your questions through the ENT questions and answers page to receive a consultation and costs for various types of tinnitus treatments.

Does tinnitus cause deafness?

Although tinnitus is often associated with hearing loss, it does not cause deafness (the opposite is not true). In fact, some people with tinnitus do not experience any hearing loss, and even in some cases, people become too sensitive to sound, which is called hyperacusis.

How to prevent tinnitus?

To prevent tinnitus, it is necessary to first know its causes and then take the necessary measures to prevent any of its causes. Because exposure to loud noises is a major cause of tinnitus, you need to protect your ears from these abnormal sounds. Never turn up the volume on your audio-visual equipment. Use ear protection if there is noise above 85 decibels in the workplace.

Pay attention to the side effects of the medications you are taking and, if possible, avoid medications that cause the tinnitus to worsen or return after recovery.

How to deal with tinnitus?

By making changes in your lifestyle, you can more or less control and get used to your tinnitus.

Avoid foods and medications that make tinnitus worse. These include alcohol, caffeinated beverages (such as coffee, energy drinks, and tea), aspirin, and salt. It is also important to have a healthy diet. A good diet for tinnitus should include large amounts of vitamins B, A, E and zinc.

It is recommended that you quit smoking if you have tinnitus. Smoking can make tinnitus get worse in two ways: It disrupts blood flow to the auditory nerve cells and, as a stimulant in the body, amplifies the tinnitus noise in the ear.

Tinnitus is more annoying than ever when resting and when ambient sounds are low. During these hours, mask this annoying sound by listening to soothing music and listening to white noise, such as the rustling sound of the water, the ocean waves, etc. Using tinnitus suppressants can help a lot.

Anxiety and stress that you have when dealing with tinnitus can exacerbate the problem. Try different methods to reduce stress to find the best method for you.

Tinnitus, insomnia and fatigue are interrelated. If tinnitus interferes with your sleep, a dangerous cycle will form. To have a good night’s sleep and prevent tinnitus from keeping you awake, do the following:

Talking to people with tinnitus

Does tinnitus go away on its own?

In many cases, yes, but if it persists after a few weeks you should see an ear specialist for evaluation.

Tinnitus is often associated with hearing loss. Therefore, in addition to helping to increase hearing, hearing aids can also improve tinnitus. However, if ordinary hearing aids do not reduce tinnitus, you can use hearing aids that can cover tinnitus (with white noise).

If you did not find the answer to your question about tinnitus problems in the text above, you can ask on the FAQ page or below this post in the comments section.